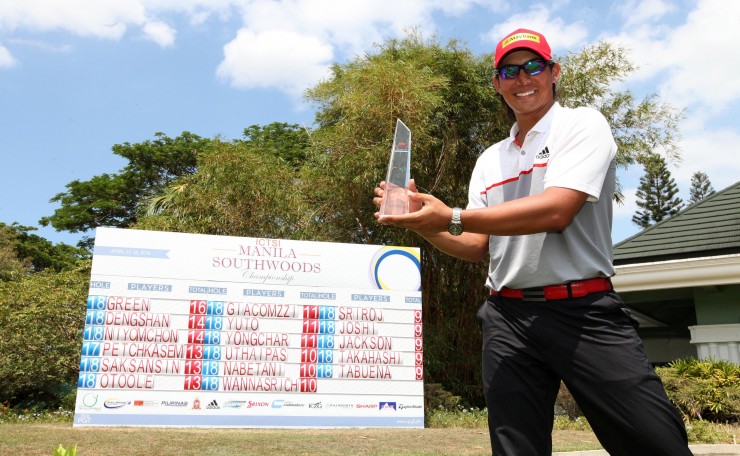 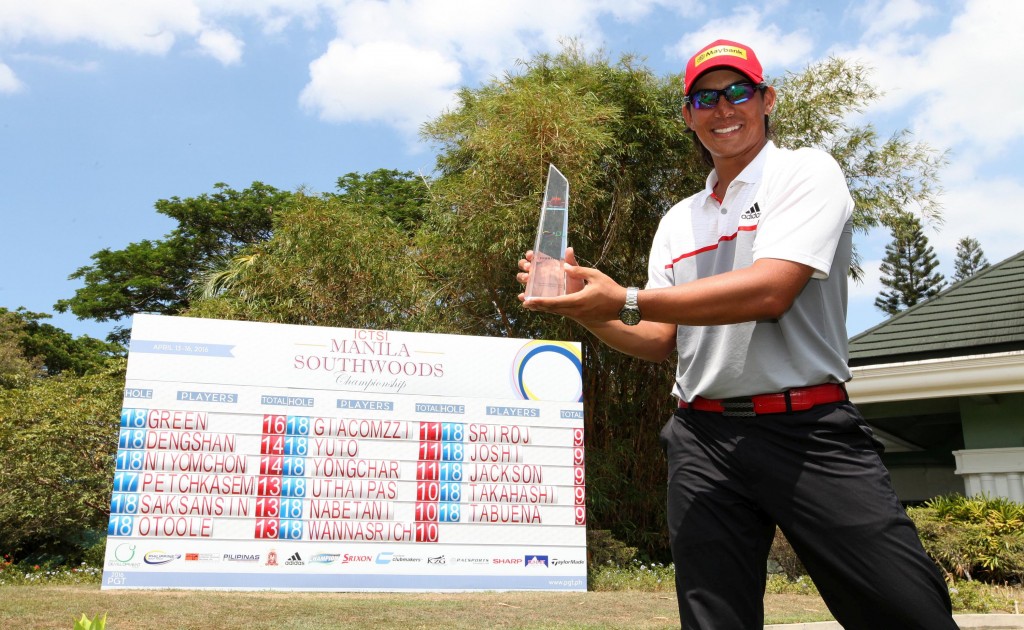 Malaysia’s Gavin Green proved his rising star credentials once again when he closed with a six-under-par 65 to win by two shots for his third Asian Development Tour (ADT) title and first outside of Malaysia at the ICTSI Manila Southwoods Championship on Saturday.

The 22-year-old Green, who claimed his second ADT win on home soil just two months ago, fired seven birdies against a lone bogey to overturn a three-shot deficit and triumph on 16-under-par 268 total at the Manila Southwoods Golf and Country Club’s legends course.

Singapore’s Koh Deng Shan closed with three straight birdies en route to a 66 to share second place with Donlaphatchai Niyomchon of Thailand, who finished with a third consecutive 67, at the US$60,000 event, which is the 10th leg of the ADT schedule this season.

Overnight leader John Michael O’Toole of the United States battled to a 71 to settle for fourth place with Thai duo Poom Saksansin (68) and Pijit Petchkasem (70) on 271 at the ICTSI Manila Southwoods Championship.

Miguel Tabuena, ranked 110th on the Official World Golf Ranking (OWGR), closed with a 68 to become the best-placed Filipino in tied-13th position on 275.

Green rolled in a 30-footer and a 20-footer for birdies on second and sixth respectively before adding more birdies on eighth and ninth to turn in 32. He went on to sink three straight birdies from 11 and was tied at the top with playing partner Donlaphatchai, who was equally impressive with seven birdies after 13.

Despite dropping a shot on 14, Green kept his cool to close out with four straight pars. The Thai, however, dashed his title hopes after stumbling with a bogey on 15 and a double-bogey on 16.

“It was a really interesting round. I played solid. Donlaphatchai was on my back from the start and we were both seven-under through 13 but I stayed patient out there. I just keep hitting good shots and I kept the ball in play.

“I think I handled myself really well. I learnt from my round yesterday. I got from four-under to one-over yesterday but today I went from four-under to six-under. I think I trusted myself more today. I stayed positive and was able to hit it close,” said the young Malaysian, who had held the second round lead before slipping down the leaderboard with a third round 72.

Green, the second Malaysian after Arie Irawan to win an ADT event outside of his home country, earned the distrinction when he won his first ADT title in 2014 and became the first amateur to win on the region’s burgeoning Tour since it was inaugurated in 2010.

He will take home a winner’s prize purse of US$10,500 and receive six Official World Golf Ranking (OWGR) points courtesy of his win. With two victories and two top-10s in the bag so far, Green needs just one more victory to gain playing rights on the Asian Tour this season.

“This win means a lot to me. I have been working a lot with my coach Chris O’Connell and I am glad to see improvements. This win also came at the right time for me as I am heading to Japan for the Asian Tour event next week. Hopefully I can continue to do well there,” added Green, who rose to second place on the ADT Merit rankings with a current haul of US$25,161.

Despite missing out on his breakthrough win, Koh was delighted to cap his best result on the ADT so far this season. After nailing four birdies to turn in 32, Koh fell back with a double-bogey on par-three 12 but brilliantly regained his ground by closing out with three straight birdies.

“I hit the ball good and I putted well. I had a good start with birdie on first which gave me some good momentum heading into the round. I stayed focused and was able to control my game out there. I missed some birdie chances but overall, I played solid,” said Koh, who amassed 28 putts and missed only two greens.

“I sank an 18-footer downhill putt for birdie on 16 and got some confidence back. I guess that was what sparked the closing birdies. I sank a five-footer on 17 and a 12-footer on the last after hitting my nine-iron from 150 yards. It’s been a great week. I will take the positives and try to play well again next week,” added the 27-year-old Singaporean.