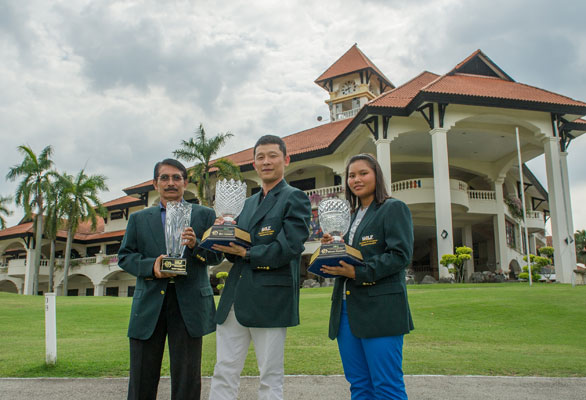 Top Amateur’s Put to the Test at KGSAAS

A group shot of the top amateur golfers in the country competing in the 2014 Golf Malaysia ‘Champion of Champions’ Championship at KGSAAS.

Shah Alam, 13 August 2014: Tournaments are won and lost on split second decisions and that’s what happened at the 28th Edition of the Golf Malaysia ‘Champion of Champions’ Championship held at Kelab Golf Sultan Abdul Aziz Shah on 8th and 9th August 2014.

The annual tournament brings together the reigning Club Champions from golf clubs throughout Malaysia and Singapore to vie for the supreme title of ‘Champion from among the Champions’.

Three categories were contested – Men’s, Ladies and Seniors, and there was lots of drama to keep everyone on their toes.

Not asking for a referee’s decision is something Nordin Yahya was left reflecting on. Nordin (2) representing Royal Kedah Golf Club incurred a three stroke penalty in the final round, one for a lost ball and two for wrong ball, which ultimately cost him the Men’s title as he finished on 154, in third place.

Fourth went to Lee Kah Ching (1) from Eastwood Valley Golf & Country Club on 155, while Lee Ka Tung (-0) from Sibu Golf Club finished on 156 to round out the top five.

The Ladies Gross Champion on 163 was 15-year-old Qistina Balqis (4) representing her home club, Johor Golf & Country Club. Janice Ling (1) from Clearwater Sanctuary Golf Resort was a stroke back on 164 to take second, while Ireen Teng (6), Tropicana G&CC, was third on 169 and Irene Hong (4), KGNS, was fourth on 171. Laura Lee (5) representing Bentong GC took fifth place over the youngest competitor in the field, 14-year-old Noraishah Alisa (12) from Danau GC, when both finished on 174.

First time winner Amir Zaki Ilham (6) from Kuala Kubu Bahru GC took the honours in the Seniors category on 156, pipping Hamdan Zambahari (6) from Kota Permai G&CC by two strokes. Thomas Liew (3) representing Tropicana G&CC, who was trying for his third consecutive Senior title, had to settle for third on 163. KLGCC’s Abdul Razak Jamaluddin (6) was alone in fourth on 167 and Lee Piah Heng (8), from Johor G&CC, was fifth on 168.