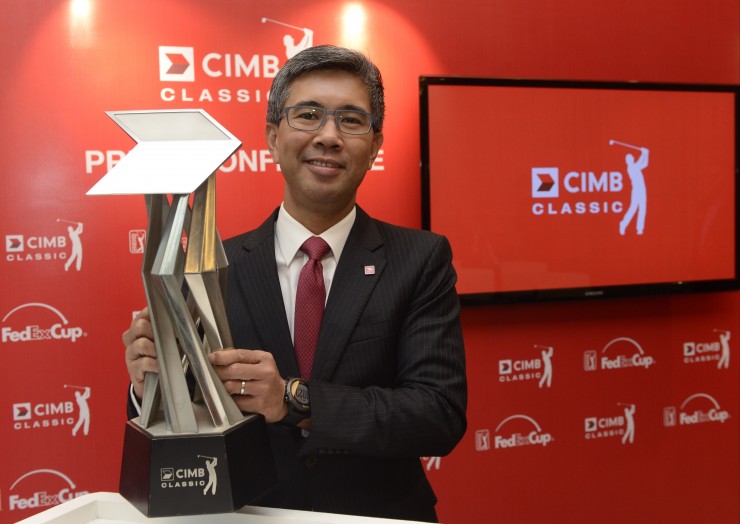 TENGKU ZAFRUL WITH THE CHAMPIONSHIP TROPHY

CIMB Group, the title sponsor of CIMB Classic since its inception in 2010, today announced the extension of its title sponsorship of the golf tournament through 2020.

The four-year extension reflects the success of the only official PGA TOUR FedExCup event in Southeast Asia, which is also the richest in the region with a purse of USD7 million. Since it was first staged, the tournament has attracted world class professionals like Tiger Woods, Henrik Stenson, Adam Scott, Sergio Garcia, Ernie Els and Ryo Ishikawa. CIMB Classic, being one of most prestigious and biggest sporting events in the region, has undoubtedly boosted Malaysia’s position as a golfing tourism destination, attracting an audience from all over Asia annually.

Speaking at the press conference, Tengku Dato’ Sri Zafrul Aziz, Group Chief Executive, CIMB Group commented, “CIMB Classic has firmly placed Malaysia on the PGA TOUR calendar, and we are pleased to continue our title sponsorship of the tournament, which has grown from strength to strength over the last six years. Today’s announcement is a clear demonstration of the Group’s appreciation to PGA TOUR and our firm commitment to further develop CIMB Classic into a top golf event not only in Malaysia but also in ASEAN. The tournament continues to generate quite a following and we will continue to deliver an exceptional experience for players and fans alike.”

“Since its inception six years ago

, the CIMB Classic has established an important international presence for the TOUR during the early portion of the FedExCup schedule,” PGA TOUR Commissioner Tim Finchem said. “As a preeminent banking institution in Southeast Asia that is headquartered in Kuala Lumpur, CIMB has provided the critical support needed for the tournament to develop and prosper. I had the opportunity to attend the CIMB Classic last year and was very impressed not only by what I saw, but by the potential it has for future growth. We are thrilled that CIMB will continue its sponsorship and we look forward to working with CIMB on continuing and strengthening our successful presence in Malaysia.”

The CIMB Classic was introduced in 2010 as an unofficial event before becoming a FedExCup tournament in 2013. Co-sanctioned by the Asian Tour and Professional Golf Association of Malaysia, it is held at the Kuala Lumpur Golf & Country Club and features a limited field of 78 players. Qualifiers include the top 60 available players from the previous season’s FedExCup Points list, the top-10 available money leaders from the Asian Tour Order of Merit and eight sponsor exemptions, which include two Malaysians. Justin Thomas of the United States is the reigning champion.

The upcoming CIMB Classic will be held from 20 – 23 October and is the second tournament of the 2016-17 PGA TOUR schedule.