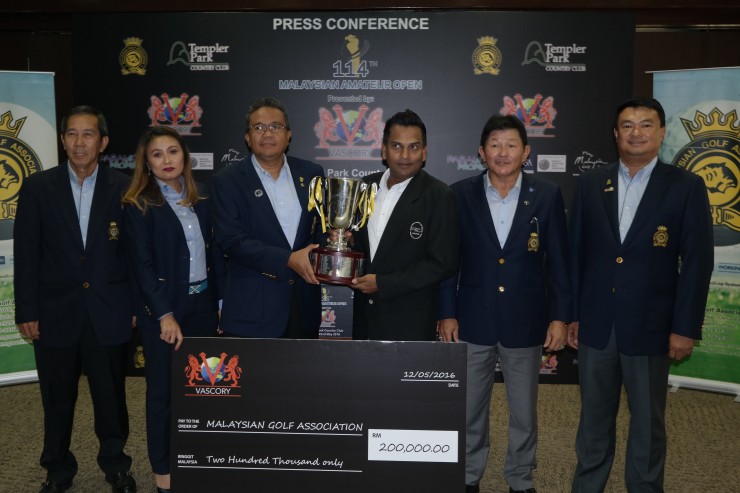 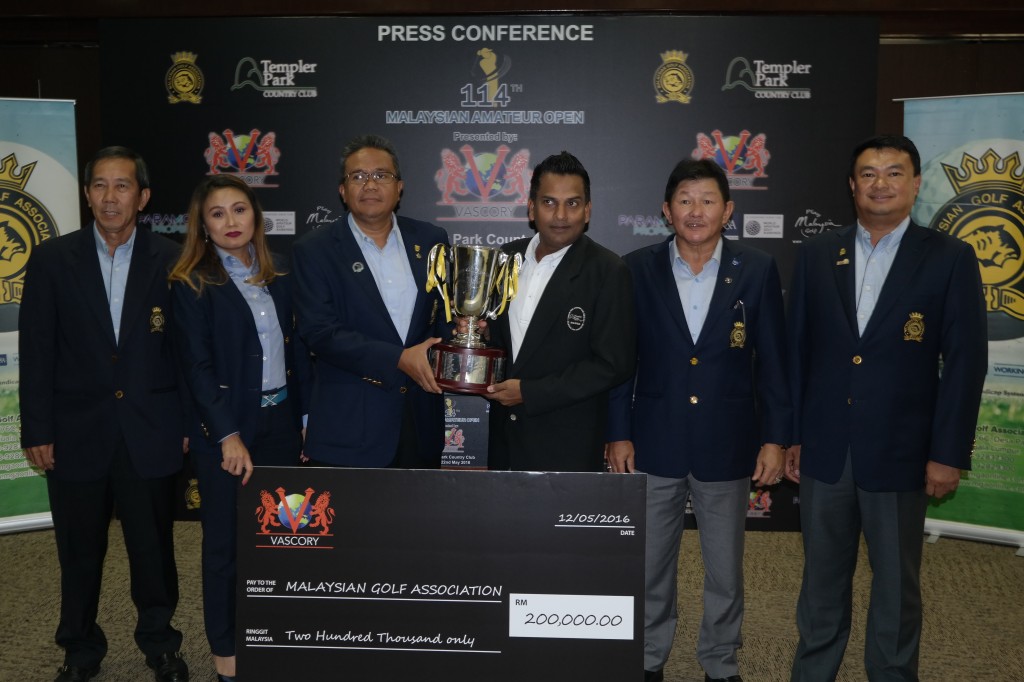 Manibalan Kutty (4th from left) handed over the mock cheque of RM200, 000.00 to Dato’ Zulkifli Dato’ Ismail, Honorary Secretary of MGA (3rd from left) being sponsorship from Vascory Group as Title Sponsor of the 114th Malaysian Amateur Open

The Championship will be played on a stroke play format over 4 rounds with a cut-off after 36 holes for the top 60 players and ties. The country will be strongly represented with entries from the members of the MGA national players. Galven Kendall Green, Daeng Abdul Rahman, Chan Tuck Soon, Ervin Chang and Amir Nazrin, Malaysian top amateurs who were identified for the 2017 SEA Games where Malaysia will host, will lead the Malaysian field.

No doubt, it won’t be easy as they will be up against leading amateurs from regional powerhouses the likes of Australia, Korea, and Thailand. Other countries that have confirmed taking part are Singapore, Nepal, Pakistan, Hong Kong, Cambodia, Indonesia and Philippines including first timer from Guam, Saudi Arabia, Kyrgyz, and Oman. So far, this edition has been the most successful in attracting top male amateurs as at printing time, we have 132 players confirmed playing in the Championship.

“I would like to thank Templer Park Country Club for readily coming on board to host the Championship”, said Tan Sri Mohd Anwar Mohd Nor, President of the Malaysian Golf Association. “I am especially grateful to Vascory Group for sponsoring the event and the other sponsors for continuing to support the National Amateur Open and the MGA.”

“We are delighted at the opportunity this partnership with our parent company, Vascory Group presents for the country’s top amateur open and one of the world’s oldest tournament. This will be a memorable weekend of elite golf for the local golfing enthusiasts”, said Manibalan Kutty, General Manager of Templer Park Country Club. “It certainly affirms our parent company, Vascory and Templer Park Country Club’s commitment to support MGA and subsequently promote the game of golf in the country”.

Inaugurated in 1894, the championship survived the colonial era, two World Wars and the heaves and sighs of the nation to be a major golf amateur golf championship that it is today.

The Malaysian Amateur Open’s steady rise in stature was further cemented in 2006 as it was included as an event in the World Amateur Golf Ranking, which ranks the world’s top amateur golfers.

Even before gaining this honour, the Malaysian Amateur Open has always been a favourite for top amateurs in this region. A look at the list of former champions certainly confirms that.

Considered as one of the most prestigious amateur golf championships in the region, the Malaysian Amateur Open is often regarded as the final benchmark for top amateur players contemplating their next move in the game. Often, it serves as the ultimate checkpoint for these players before setting on their journey in the paid ranks.

This Champion will be rotated between East and West Malaysia to provide equal opportunities by golf clubs divided by the South China Sea to host the National Amateur Open. The 115th edition will go to Sabah, the Land Below the Wind where Sabah Golf Association will take the lead in organizing the Championship. The 113th edition was hosted by Sarawak Golf Association and Kelab Golf Sarawak was awarded as the host venue.